We will begin with our neighbors (across the street) bringing in their new Heartland Bighorn model 3870FB. Like us, they also bought their trailer from our friends at T & S Enterprises in Navasota. They left here on Monday and returned yesterday after making their trade. 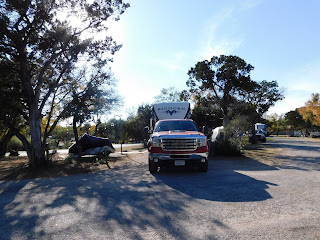 Just backed into their site. 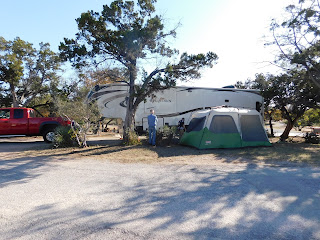 Getting everything hooked up after arrival. 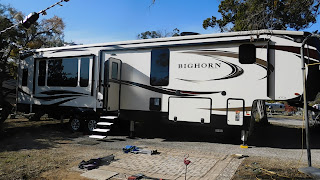 Side view-boy, this thing is long! 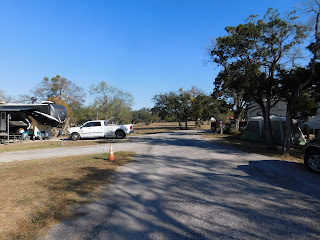 Our Landmark on the left and their new Bighorn on the right.

Now to the fun stuff, the deer hunt. This is our first hunt of the year and is a disabled-person hunt, one of two. These hunts are always a lot of fun because the disabled folks that are excited about being able to hunt-anywhere- and are grateful to have a nice hunting area with excellent hunting blinds. Most of the hunters are confined to a wheelchair but a couple were able to walk, but with very limited mobility.

We always begin the hunts by putting out warning signs on Park Road 4. We also place barricades at the trail crossings including the Longhorn Caverns state park, which is nearby and on all gates into the hunting areas.

There were 7 hunters, which is the maximum number of hunters here. The hunter that I was assigned to was named Freeman, driven by his son, Nathan. Freeman is one of the hunters in a wheelchair. He was able to harvest a nice 8 point buck on Tuesday evening, but missed a shot on another deer. His deer ran out of sight, so according to the rules, Nathan didn't pursue the deer. Chip and Jim, another Park Host, came out to track the wounded deer and I helped them. I acted as the "blood marker", standing at a point where blood was seen and giving them a reference point to return to, to resume their tracking search. We only tracked for bout 50-60 yards before finding the deer. We returned to the park, where the deer was gutted in preparation for processing at the Griffith Taxidermy in Burnet. Later in the evening, I rode in to drop the two deer that had been gotten today off with another park host, Don. I believe that Mr. Griffith was donating the deer processing for the disabled hunters. Thank you for your donation Robert! Mr. Griffith's daughter was the first hunter to hunt on a disabled hunt here at Inks Lake, three years ago.

Wednesday was a two-hunt day, but unfortunately Freeman didn't see another deer on the morning hunt. He chose to return home after this hunt and give up for this year. He did the same thing last year, but I believe his son had to work. Only 1 more deer was taken tonight, but there were several shot fired, but none connected enough to bring the deer down. One deer was wounded but not found. I didn't have a hunter, but came down to be of assistance and ended up picking up Mitchell, Chip's hunter. Chip had gone to track the missing deer, and I went to get him.

Corey Evans, the superintendent of the park, furnished a chili dinner for the hunters and all of us that were involved in the hunt tonight. The chili was very good and really "hit the spot" on a cold hill country night. We spent a lot of time around the campfire!

This morning I was able to sleep in, since I didn't have a hunter. I went down bout 6:30 this morning to hang out with my friends and in case I was needed to help. Again, it was good that I was there because I rode with Don to pick up his hunter. His hunter, also named Jay, has quite  wheelchair and apparatus to fire his rifle. He sits up much higher than a normal chair and Chip had to go out to modify the blind to accommodate him. Jay's rifle us fired electronically somehow, although I didn't see it in action.

I am in awe of these hunters. They all have such an outstanding attitude for their various conditions, and they stay in communication while in the field by telephone or text, so they know what is going on around them. We can hear the shots in the park, but these guys know what was shot and by whom, even before we do. I want to continue to assist these folks for as long as I can.

Here's a quick catch-up post to let you know that we're still around. We're kind of in a rut, with work days being Friday, Saturday and Sunday. Cleaning cabins isn't too bad but I wouldn't want to do it all the time. We were taken by surprise when we were told that we had to clean cabins, but then it was explained that they (park management) want all hosts to be able to clean cabins. This is a vital job and must be done daily because of turnover of guests using the cabins. If everyone has some knowledge of cleaning the cabins, it is easier to find someone in case of some sort of emergency. The only problem with this plan is that it isn't distributed evenly. Some hosts work on cabins one day per week, others (like us) do two or three. One couple that I know refused to work on cabins completely! I don't know how they got away with that, but it's what I was told. This doesn't include doing "deep cleaning" which is all caught up right now. We worked hard getting the cabins deep cleaned at the beginning of our stay, and I don't like it! It is much harder to do and more time consuming. I guess I'm not a house cleaning guy.

We've had a couple of visitors since we got here. Some old friends of mine, Leonard and his wife Gail from La Marque came up to Johnson City where they were visiting friends there. Leonard is the retired Fire Marshal from La Marque and I knew him early in my law enforcement career. We met them in Marble Falls at the world famous Bluebonnet Cafe for supper with their friends Jim and Sylvia. It was an enjoyable time, reminiscing over the "olden days" with Leonard. Leonard and Gail came up to the park the next day to see our new Landmark and were very impressed. They have a trailer, but it is older and they have no intentions of buying a new one.

The day before yesterday, some other old friends came by to visit. Bill and Karen have worked here at Inks Lake as park hosts a few years ago, and we stayed next door to them. Bill had done some driving with us on the deer hunts when they were here  before. We had a nice but short visit with them but our new neighbors, Rob and Vickie arrived for their stay here and we had to help them get backed in and situated. They will also work on the deer hunt, as well a other things.

We've also gotten into a routine of going out to eat while we are here. On Tuesday nights we all go to the Hoover Valley Country Store and Cafe for $5.00 burgers and fries. This place is a local favorite, with a small convenience store, gas station and little cafe, but the food is good and who doesn't like a $5 burger? They have no website, but there are reviews on Yelp and Trip Advisor if you are interested.

On Friday's we have been going to the Dam Grill which is located near the Buchanan Dam, and another local favorite. We go there on Fridays for the catfish basket specials but we were served cold food twice, so last weekend we went to the 2300 Cafe in Burnet. The food was hot and tasty but we may give the Dam Grill another try before giving up on it. This Friday, we have plans to go to the Bluebonnet for Bunky's birthday. I know it will be good and we have some errands to run in Marble Falls. That's the thing about being in a park that is 10-12 miles out of town, you must plan your trips well or spend a lot of money on fuel.

We're only a couple of weeks until the deer hunt begins, and that means more work for me, but it's also lots of fun.