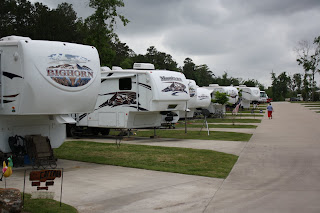 Here is a photo (thanks Bobcat) of one row of trailers that were attending our rally. The Montana next to mine isn't a part of the rally but was parked there prior to us arriving. You can also see Stella walking down the street toward Bill and Ornell's trailer. 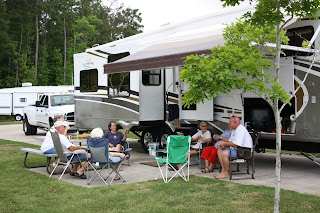 Here is a group that is sitting around at Bill and Ornell's trailer. This is just one of the trailers where people hung out.
Several people arrived today including one Big Country (Jaime and his family), five Bighorns (Bob & Ann, Tom & Marti, Ken and Denise, Charlie & Peggy and Gary & Michelle), two Landmarks (Tom & Judy and Terry and Carol) and one Trail Runner (Jason & Tammi). We are getting a good group together!
We watched the arrivals all day and then in the evening, we decided to go out to eat. One group went to CrabbyDaddy's for seafood and a smaller group went to Hooter's. Guess which group we went with? Yep, gotta love those hot wings...
We all came back and hung around in the park until retiring for the night around 10 o'clock, and yes, I stayed up that late!
So long.
Posted by Jay at 1:29 PM